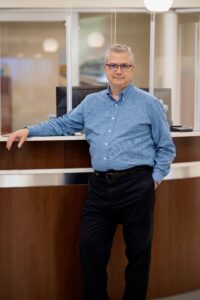 After a nationwide search, the board of directors of Maine State CU voted unanimously to appoint Maine native and current Executive Vice President Stephen Wallace as its new President and Chief Executive Officer. He will replace current President & CEO Tucker Cole, who is retiring on June 1, 2022.

Stephen Wallace joined Maine State CU in 2017 as Vice President of Lending. He was promoted to Senior Vice President of Retail in 2020 and rose to Executive Vice President in 2021. Wallace started his financial service career at Fleet Bank and worked at Camden National Bank as Head of Retail Banking, overseeing their branch network. Before joining Maine State CU, Wallace worked as a consultant helping community banks and credit unions develop a customer-centric sales model.

“Steve exemplifies what Maine State Credit Union is,” said Board Chair George Lapointe, “He lives the credit union mission each day and encourages a culture of learning and development in serving our members. He has a great vision for the future of the credit union and understands the importance of providing digital banking tools, and human interaction is the key to continued growth.”

Tucker Cole has devoted most of his career to the credit union movement. He began working in the industry at Evergreen CU and joined Maine State CU in 2016 as President and CEO. Cole also served a term as Chairman of the Maine Credit Union League’s Board of Directors.

During his tenure at Maine State CU, Cole has led the organization’s digital transformation, created a commercial business division, and expanded its membership to include Cumberland, Androscoggin, and Sagadahoc counties.