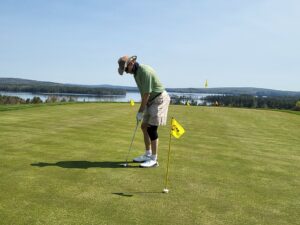 Evergreen CU’s Howard Lowell practicing his putting before the contest.

On May 12, 140 golfers participated in the annual Ending Hunger Golf Tournament at the Belgrade Lakes Golf Club. While the event was not competitive in nature, the League would like to recognize three golfers who hit the longest drive or secured closest to the pin on select holes:

Each player received a gift card for their achievements.

The League would like to again thank all the players and sponsors of this year’s tournament, as well as the amazing staff at the Belgrade Lakes Golf Course for helping us host a successful event.