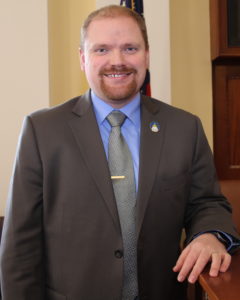 The Maine Credit Union League is pleased to welcome Robert Caverly as the new Vice President of Governmental Affairs. In this role, Robert will lead the League’s lobbying efforts in Augusta and manage relationships with Maine’s congressional delegation.  He also will work closely with the Credit Union National Association’s (CUNA) legislative and regulatory affairs team on important policy issues impacting credit unions.

“Robert brings with him a wealth of experience and perspective about the legislative process,” said Todd Mason, President/CEO of the Maine Credit Union League. “He knows how to effectively communicate with legislators because he’s been doing that for the past nine years. I’m confident he will be a great representative for Maine’s credit unions and an important asset for us as we continue advocating for our policy goals.”

Robert began working at the Maine State House in 2010, serving as the Senior Policy Advisor to Senate President Kevin Raye. His experience as a policy advisor allowed him to work closely with some of the legislature’s most influential committees, including the Appropriations and Financial Affairs Committee. In 2014, he was promoted to serve as Chief of Staff for Senate President Michael Thibodeau.

“I am eager to bring my skills and expertise to work for the Maine Credit Union League,” said Caverly. “Having served as the top advisor to the Senate President, I have an in-depth knowledge of the legislative process. I also understand how important it is to work across party lines. I take great pride in the friendships I’ve developed with Republicans, Democrats, and Independents and look forward to working with members of the Legislature in this new capacity.”