Representatives from credit unions from across the state gathered at the Harraseeket Inn in Freeport on February 12 for the annual luncheon celebrating the conclusion of the Maine Credit Unions’ 2018 Campaign for Ending Hunger. A record-breaking $792,900.68 was raised in 2018, over $50,000 more than the total raised in 2017!

“This event honors the tremendous, collaborative efforts made by our credit union network in its fight to combat hunger here in Maine in 2018,” remarked Devine. “You all have donated time, money, and other resources to support this important initiative. And, I can assure you, your efforts have made a valuable difference in the lives of many Mainers.”

While fundraising is a major component in assisting with ending hunger in Maine, the impact that credit unions are making goes beyond fundraising alone. Collaboration, financial education, workforce development, community outreach, and microbusiness growth are also areas that help connect the dots.

“Giving money is really important and we’ve done a phenomenal job of raising money over the years,” stated Todd Mason, President of the Maine Credit Union League. “To solve the real problem of hunger takes more than just money. It takes time, and it takes your talents as well.” 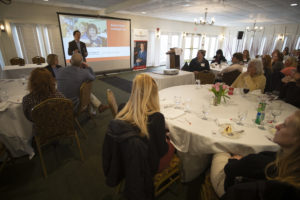 Alfond shared his experience in the state legislature, where he saw numerous bills aimed at ending childhood hunger in Maine. He highlighted that statewide statistics can become even more shocking when broken down further. In Milo alone, nearly 93% of school-age children qualify for free and reduced meal prices.

“This state is connected by poverty,” stressed Alfond. “It doesn’t matter what zip code you’re in, there are children everyday who are wondering when their next nutritious meal is going to come to them. When I see this stat, it honestly just gets me super, super uncomfortable. It should make everyone feel uncomfortable because this shouldn’t be happening in 2019.”

Alfond went on to explain the systems that are in place to address hunger in terms of a “hunger hierarchy.” They fall into four categories: fully funded food systems (USDA food programs, SNAP, WIC), Emergency Food Systems (Meals on Wheels, backpack programs, food banks, school pantries) Crisis Food Systems (soup kitchens), and No Systems (a category reflecting those who are going hungry. In 2015, the Taskforce to End Student Hunger was created, adopting a five-year plan to end childhood hunger in Maine. Full Plates has built a statewide coalition with numerous organizations who are working together to implement this plan

“It’s amazing the amount of time, money, and effort that credit unions are giving across the state to end hunger in Maine!” concluded Alfond. 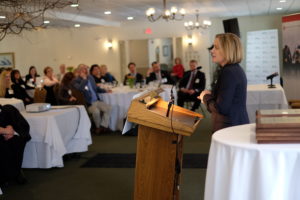 “Food bankers, we never pass up a free lunch!” opened Kristen Miale, President of Good Shepherd Food Bank. Miale immediately went on to share how specifically the support of Maine’s credit unions through the Campaign for Ending Hunger made an impact in our communities:

She stressed how the funding provided by Maine’s Credit Unions is unique in that it doesn’t restrict funding, which is unique and very much appreciated.

“We’re able to plug those gaps,” explained Miale. “Having that flexibility means that we can reach communities that nobody is thinking about.”

Miale also discussed issues surrounding access to food and the stigma surrounding needing to ask for help. A snow day, for example, means 80,000 kids will have to worry about not having breakfast or lunch. Programs like the Backpack Program allow kids to look forward to the weekend without having to worry. Many of the programs offered by Good Shepherd Food Bank, and that are supported by the unrestricted funding provided by the Campaign for Ending Hunger, enable kids to focus on being kids.

Across the board, funding has been cut over the years for the programs that were designed to be safety nets for families in need. This has resulted in Good Shepherd Food Bank feeding 15% of our state’s population. To change this, they are working with Governor Mills on bills to restore benefits for Mainers who need assistance and to add funding. Resources need to be allocated so everyone has the food they need.

“In the United States today, nobody should have to stand in line and ask for food,” stated Miale.

In a surprise presentation at the end of the Campaign for Ending Hunger Luncheon, Mason unveiled a new, refreshed logo that will be used moving forward. It is designed to have a clean, unified feel and approach.

“We want to be sure that when we are talking about the Campaign, we’re doing it in a consistent way,” explained Mason. 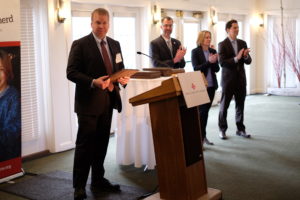 While every credit union in Maine contributed financially to the Campaign for Ending Hunger in 2018, the top seven credit unions in each category were presented with a plaque at the luncheon: