(From Credit Union Times) – Credit unions gained share in a shrinking credit card market in September, while losing share in a slow-moving market for car loans, according to a Fed report released Wednesday.

Credit union’s share was 6.4% in September, down slightly from 6.5% in August but up from 6.2% in September 2019. The share rose as banks and finance companies had steeper drops.

The drop in credit card balances has continued for all lenders since COVID-19 was declared a pandemic March 11.

Credit card balances have been falling at credit unions too, but at roughly half the rate of banks.

n motor vehicle lending, the G-19 shows all lenders held $1.22 trillion in loans in September, up 3.6% from a year earlier.

Comparing the Fed’s numbers with CUNA’s Monthly Credit Union Estimates released Thursday shows credit unions held 31.5% of the nation’s car loans on Sept. 30, down from 32.2% a year earlier and 31.6% as of June 30. 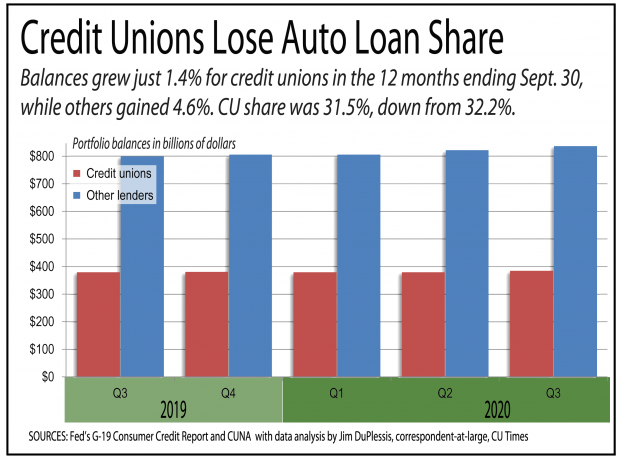 Besides its quarterly auto report, this month’s G-19 also showed government student loan balances rose 3.3% to $1.7 trillion. Student loans’ share of non-revolving loans was 53.3% in September, compared with 53.6% in September 2019.