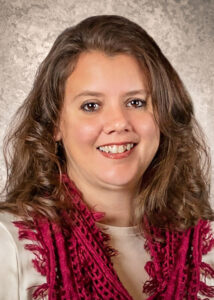 Acadia FCU is pleased to announce that Teresa Driscoll was recently promoted from her role as Member Service Representative to Branch Manager of the Ashland location.

In this role, Driscoll will supervise overall branch operations while maintaining established credit union policies and procedures. She also is in charge of Ashland member development, overseeing member and lending services, and underwriting consumer loans.

“I am excited to help grow Acadia FCU’s membership as Ashland Branch Manager,” said Driscoll. “I’m also looking forward to being part of Acadia’s commitment to our local communities by proudly supporting our local food pantries and working with area students to help them prepare for their financial futures.”

A 2003 graduate of Kentucky’s North Hardin High School, Driscoll attended Art Instruction Schools and eventually built a career working in the world of financial services. She spent the last nine years working for NorState FCU in various member service and lending roles, eventually serving as assistant branch manager. Driscoll stepped into her role as Ashland Branch Manager in January after being hired in September of 2021.

“Teresa came to us with a well-rounded credit union skillset and embraced her role in consumer lending from the get-go,” said Karen Daigle, VP of Operations at Acadia FCU. “She learns quickly and will soon be ready for mortgage lending. The pride she takes in her work is truly inspiring. We look forward to the crucial role Teresa will play in the ongoing success of the Ashland branch.”

A self-described “army brat,” Driscoll was born in Texas, lived all over the United States, and abroad in Germany. She resides in Ashland with her husband, Bruce, children, and two dogs. She enjoys family time outdoors, camping, crocheting, and crafting with her Cricut cutting machine.