On May 17, Synergent, your League’s service subsidiary, held its Annual Meeting of Shareholders at the Maine Credit Union League’s 81st Annual Meeting & Convention. Tucker Cole, Chairman of Synergent’s Board of Directors, called the meeting to order. David Desjardins, Secretary of the Board, completed roll call and approval of the minutes from the 2018 Annual Meeting of Shareholders. Claudette Mason was appointed as Recording Secretary and Dan Cummings was appointed as Parliamentarian.

“Synergent continues to have a very strong balance sheet,” stated Weller. “We ended the year with current assets in excess of $12 million.”

Weller presented his full report and shared that total assets increased 20% over the prior year and that the net income for the year was $4 million. With regards to total liabilities, debt continues to be paid down, improving stockholders equity, which ended the year at just over $14 million. In the last fiscal year, Synergent also benefitted financially from a contract buyout due to a merger that brought in additional revenue that was beyond what was projected in the annual budget. Investment in technology and equipment came in at just under $3 million, and the budget for the next fiscal year accounts for additional technology and equipment investments moving forward.

“All in all, a very strong financial position,” concluded Weller. “A well-run organization.”

Todd Mason, President/CEO of Synergent, provided the President’s Report. He opened by highlighting that as a company, Synergent bases its strategic plan on four pillars:

Working within this framework, Mason summarized numerous Synergent successes and initiatives, including being able to provide $1 million back to partner credit unions in rebates. Though these are not guaranteed, the rebates are a way credit unions experience additional value by working with Synergent.

On the sales side, Synergent brought on Webster First, its first billion dollar credit union. Credit Union of Atlanta signed on with Synergent and will complete its core conversion later this year. In late 2017, Synergent made a change to expand its sales territory on a national basis. Mason highlighted that prior to that change, Credit Union of Atlanta wouldn’t have been a customer. As a result, an increasing number of our sales leads are coming from outside our traditional territory.

“It’s important we take care of our current customer base, but just like you need to grow, Synergent needs to grow as well,” stressed Mason. “Our ability to grow and build on new business helps our ability to serve you.”

On the product development side, Todd highlighted that Synergent launched a check signing solution with core processing integration and is working on a tablet tool to help credit unions serve their members on-the-go, a hosted FICS model for mortgages, and a payments hub.

“These are your dollars, this is your company,” said Mason.

In highlighting performance and growth, Mason shared that IT audits were very successful and over 99% uptime was reported. Collectively, Synergent is approaching 1 million member accounts on its hosted core with over $10 billion in assets. From 2014-2018, the average member relationship growth has grown by 15% in the US. For Synergent customers, the average is 20% growth.

“We have to continue to work together to collaborate and cooperate,” stressed Mason “We need to do that on the trade association side, on the advocacy, but we also need to make sure that we do that on  the business side. These technologies that we’re investing in, things that we deliver are not inexpensive, they’re not easy to do. Bringing together our collective power, numbers like that, are a sign of all that we are doing now and can do.”

Where Synergent Is Heading

Looking to the future, Synergent will continue to invest in data and digital. Synergent BI, the recently launched business intelligence tool will continue to be built upon. There will be growth through the addition and/or expansion of products such as the tablet, digital banking, rewards, and automated marketing offerings. In the payments space, further focus will be dedicated to P2P and faster payments.

Synergent also will be conducting workflow studies and implementing improvements for both credit unions and their members.

“The old mantra of ‘don’t make me think,’ we need to make it as easy as possible for you to be able serve your members and to as easy as possible for members to access their services through you,” explained Mason. “When they pick up their mobile phone and they use your services, they shouldn’t know there are three departments in Synergent and five different vendors. They should operate as one. We are not there yet, but we are working hard to get to that point. We know that’s where you need to be and where we need to be. It is part of the investment we are making.”

The Annual Meeting of Shareholders adjourned and flowed into a presentation about Synergent BI, the new business intelligence tool and data warehouse recently launched by Synergent.

“There is a problem in the industry today,” opened Ben Jordan, Senior Vice President of Product Development. “When Todd first got here, he heard it from all of you quite quickly and clearly. As credit unions, you have all this data, but you can’t really use it as well as you like. It’s hard to access or interpret; sometimes both. That’s a big challenge and our goal is to try to find a way to ease that burden.”

Jordan went on to describe the process that Synergent went through in identifying solutions. They could not find the right fit. They found that the products and solutions available are not cost effective, they are not intuitive, and often require a programmer and database manager, incurring a significant amount of overhead. The solutions found also were not easy to drill down into accessing the data.

Jason Cormier, Senior Implementation and Training Analyst, treated attendees to a live demonstration of Synergent BI. He explained how secure the web-based system is with multi-factor authentication and showed screen-by-screen how the software works, blending Episys® member data with third-party resources, along with the tools, visualizations, and dashboards that could be produced using the underlying data.

“The SBI tool is very powerful and gives you a lot of ways to look at your data,” commented Cormier.

Alpha and beta testing was completed using different subsections. The team learned a lot during this process. Enhancement requests made by credit unions in the alpha and beta test groups were very helpful as the product was developed. Three subscription models (Essentials, Premium, and Premium+) were developed to fit the varying needs of each credit union.

The session closed with an interactive Q&A session and an invitation for credit unions to schedule a demo to see how Synergent BI works with their own data. 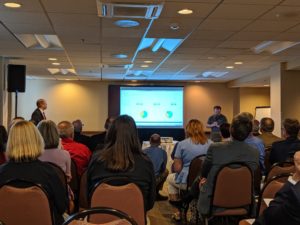 The room was full for the Synergent BI presentation.