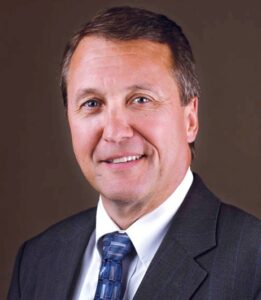 At his last Annual Convention as CEO of Maine State Credit Union, Tucker Cole was presented with several awards to recognize his years of dedicated service to the credit union industry in Maine. He was honored with the League Chairman’s Award and the 2021 Political Involvement Award. Tucker also was recognized for being the top individual donor for CULAC in 2021 and for his contributions as a longtime member of the League and Synergent’s Board of Directors.

“Tucker has been a strong credit union advocate throughout his career,” said Robert Caverly, League Vice President of Governmental Affairs. “The League has benefited so much from Tucker’s leadership of the Governmental Affairs Committee the past two years. The pandemic presented many challenges to our advocacy efforts and at every step, Tucker has been there to help and offer his advice. He is very deserving of all the accolades he received at Convention. Without question, the League, Maine credit unions, and credit union members have all benefited from Tucker’s hard work and dedication.”

In her award remarks about Tucker, Joann Bisson, Chairwoman of the League and Synergent Board of Directors, said, “I have known Tucker for many years and have always valued his friendship, advice, and his deep commitment to the credit union movement. As an advocate for Maine credit unions, our members, and employees, he’s embodied the People Helping People philosophy through his work for well over two decades.”

Tucker will be retiring soon after 25 years of service to the credit union industry. On behalf of the League, Synergent, and the Board, we congratulate him on his outstanding career and wish him a happy and healthy retirement!