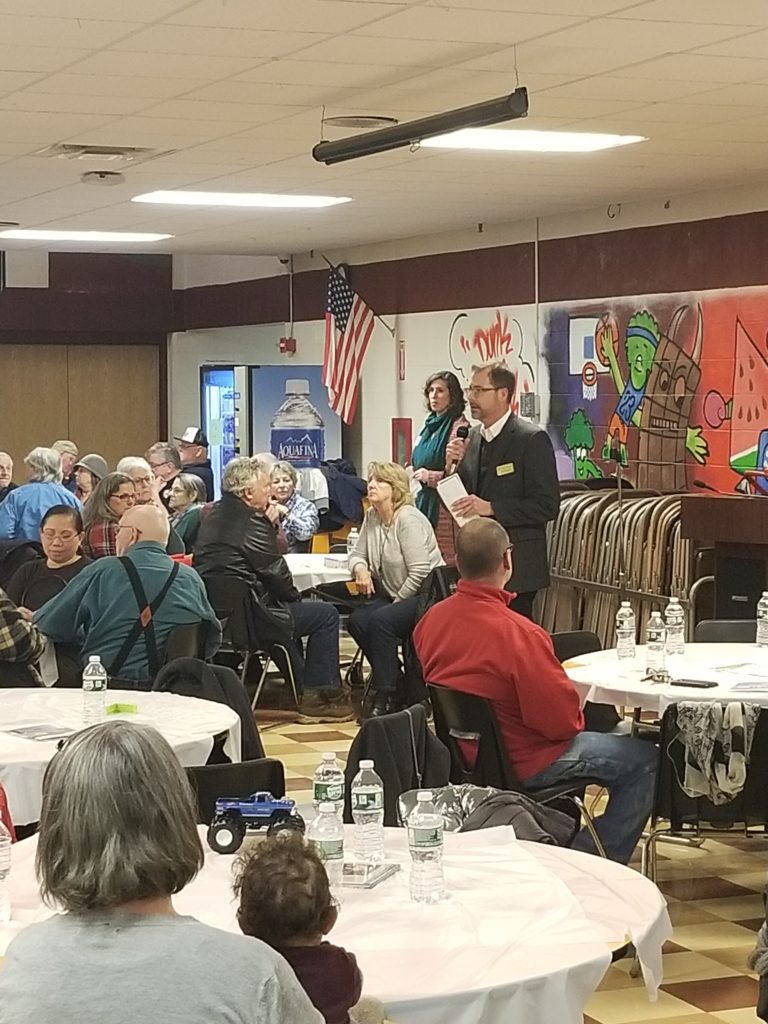 The League was pleased to serve as one of the sponsors of a spaghetti dinner benefiting Auburn resident Barbara Hinckley, who lost her life savings in a financial scam. The event, organized by former Governor John Baldacci, brought together elected officials including Governor Mills, business leaders, and community members to raise money for Hinckley and call attention to the severity of elder financial exploitation.

League President/CEO Todd Mason attended the event and addressed the crowd. In his remarks, he highlighted Maine credit unions’ deep commitment to preventing elder financial abuse and our long collaboration with Senior$afe, a program that helps frontline staff at financial institutions recognize the signs of abuse.

“Credit unions have your back,” said Mason. “We are all in this fight to end elder financial exploitation together, and I commend Barbara for having the courage to come forward and tell her story. Her bravery will make a difference.”

Anyone interested in providing financial support to Hinckley can forward a donation in her name to her church:

The First Universalist Church of Auburn
169 Pleasant St.
Auburn, ME 04210

(From Lewiston Sun Journal) – Standing before several hundred people who came to help her recover from a scam that stripped away her life savings last summer, Barbara Hinckley said that “one person made my life miserable, but the rest of them have been wonderful.”

Organizers lost track of how many showed up Wednesday at a spaghetti dinner sponsored by former Gov. John Baldacci. Nor did they have a chance to count the money they took in Wednesday night.

“This was huge,” Baldacci said, as volunteers scurried to clean up Auburn Middle School’s cafeteria.

Hinckley, 95, said it’s possible she might wind up with more money than she lost — something unimaginable to her after a fast-talking con man convinced her to empty at least $16,000 from her bank accounts.

This time, though, nobody’s going to take it from her. She said she only answers the phone when she knows who’s on the other end, doesn’t answer emails from strangers and, perhaps most fittingly, she can’t spend anything much without her family’s approval.

Those who came to her aid Wednesday said they wanted to lend a hand to a brave woman willing to tell her story because, as she put it, she didn’t want others to make the same mistakes.

“I wanted to help others and I hope I did,” Hinckley said.

Jane Margesson, communications director for the Maine AARP, said it took “extraordinary courage” for Hinckley to tell the public everything that happened to her. Most victims, she said, are too ashamed to speak up.

“Barbara is a fraud-fighting hero,” Margesson said of Hinckley, whose cautionary tale garnered wide attention after the Sun Journal published a story about her plight.

Jon Block, an attorney in Portland, said that after reading the story about what happened to Hinckley, he mentioned it to Baldacci.

“Literally, within two seconds,” Block said that Baldacci declared his intention to organize a fundraiser for her.

In the hours before the dinner began, Baldacci stood in the kitchen making sure the pasta was cooked just right and the sauce simmered appropriately.

He said he had 60 pounds of pasta, about 17 gallons of sauce, cases of lettuce and a whole lot of tomatoes, onions, bread, cupcakes and more.

“My goal is not to have anything left over,” Baldacci said as he stirred the spaghetti, a task he wouldn’t hand off to anyone else.

About an hour before the dinner kicked off, Hinckley arrived after an especially hard day. She’d had eye drops put in early in the morning that left her vision a bit impaired. Her Auburn mobile home’s water got cut off later. And then the furnace wouldn’t turn on.

But somehow she wasn’t especially fazed.

Led to the kitchen, Hinckley met Baldacci for the first time after conversing with him on the phone regularly for a couple of months. Neither was surprised they hit it off immediately.

“He’s just been wonderful to me,” Hinckley said.

Hinckley’s minister, the Rev. Jodi Cohen Hayashida, minister of the First Universalist Church of Auburn, said many church members volunteered and attended the dinner because it provided “an opportunity to show her some love” and to demonstrate some concrete care at the same time.

She said the dinner was a chance for people to come together make a statement that the “casually cruel” are outweighed by a community that embraces everyone.

Carol Russell of Oxford, who works in Auburn, said she came after reading about the fundraiser on Facebook.

She said it was “a sad thing” for someone to lose her life savings, but everyone rallying to help Hinckley in the aftermath was so nice that she wanted to be part of it.

“This is a really important issue,” he said, and has hurt many Maine families over the years.

Sgt. Jason Moore of the Auburn Police Department said he’s seen “a fair share” of cases in his jurisdiction and has no doubt there are many that are never reported.

Scammers get away with it, he said, because many are based overseas and virtually impossible to catch. They’re so brazen that when an officer spoke to one on a victim’s phone, the con man asked to speak to his mark again, hoping somehow to get a little more money.

“They know I can’t come knock on their door,” Moore said.

Scammers are both relentless and creative,” Margesson said.

Officials said everyone needs to be wary because there’s nobody who can be sure they won’t fall prey to a scam. That’s why stories like Hinckley’s are so valuable, they said, in reminding the public of the dangers of sending money to people they don’t know.

Gov. Janet Mills, who showed up to serve spaghetti, said scam artists are everywhere, so friendly strangers should be treated warily.

She praised Hinckley “for putting yourself out there” and called Baldacci “one of the treasures” of Maine for his generosity.

“It was a labor of love,” Baldacci said.