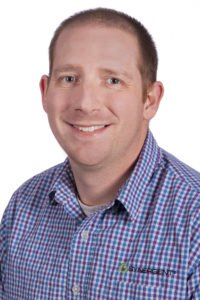 John wears many hats at Synergent. Some of his key responsibilities include serving as the backup team lead for IT/Ops, helping manage the OpCon automation platform, coordinating critical Symitar® Episys® software updates and releases, IBM server upgrades, and contributing to key end-of-year projects. No matter the role or the challenge, John tackles each job with a positive attitude and willingness to lead.

“John always goes above and beyond to help Synergent and our credit unions,” said Shelly Richard, Team Leader – IT/Ops at Synergent. “He is extremely easy to work with and incredibly thorough. I can always depend on him because he is passionate about his work. He is very deserving of this recognition.”

Among others sharing accolades about John is Tim Gilman, Vice President – Information Systems at Synergent. Tim praised John’s work in support of several recent mergers and migrations and noted how Synergent’s success on these projects was due in large part to John’s ability to troubleshoot challenges.

“In my view, John has all the right elements,” said Gilman. “He has phenomenal technical and people skills. He can handle all types of interactions and is always willing to jump in and lend his colleagues a hand, even in challenging situations.  I can honestly say that without John, I would not be as successful.”

John began his career at Synergent in 2008.  He briefly left the company in 2010 and returned in 2012.  Throughout his tenure, he has proven to be a strong technical leader, devoted mentor to his colleagues, and a symbol of operational excellence.

“I enjoy working at Synergent because of the people and the culture,” said Deem. “I really believe the staff here is amazing and I enjoy working with everyone. When issues arise, I appreciate the way people come together to tackle the problem.  There’s never a dull moment and we get to work on many new projects, which keeps things fresh and exciting.”

On behalf of the League, Synergent, and our credit unions, we extend our congratulations to John and thank him for his ongoing service.