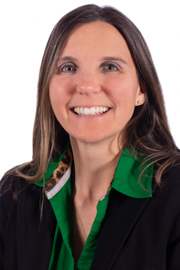 “Every project Amy touches, every email she sends, every conversation she has, she always makes a solid connection with the recipient,” said Samantha Madgey, Synergent’s Assistant Vice President – Development. “She treats every interaction with internal staff and credit unions as an opportunity to build trust and deepen relationships.”

Amy has been with the organization since 2007. She currently serves as Synergent’s Solutions Coordinator, a position she has held since June 2019. In this role, she is responsible for implementing new technologies for credit unions. This involves translating a credit union’s business needs into programmer specifications and then, when the programmers are done, testing those credentials to ensure they meet Synergent’s high quality and usability standards. Amy closely works with all areas of Information Technology, outside vendors, and directly with credit unions.

“Amy won this award for her incredible contributions, not just last year, but for many years,” said Ben Jordan, Synergent’s Senior Vice President of Information Technology. She has a unique ability to define and focus on the exact issues at hand and consistently considers what is best for our credit unions. Bigger still, Amy is a relentless team player whose positive enthusiasm makes it so uplifting to work with her.”

Throughout her tenure with Synergent, Amy has received several company honors including six quarterly staff awards in 2020 alone. When being recognized for the quarterly Conqueror Award earlier this year, Amy’s colleague wrote, “When it comes to performance, our credit unions set the bar of service excellence very high. Amy showed what it is like to live up to this bar and in the end when it mattered most, she became the Synergent bar.”

“Being selected as the Employee of the Year is an amazing honor,” said Conley. “I have seen several deserving co-workers over the years receive this award and there are no words to describe how I feel about being added to this list. There are many deserving and hardworking people at Synergent and the Maine Credit Union League. We all work to ensure our credit unions can offer the best products and services to their memberships and communities. I am proud to work for an organization as dedicated and wonderful as Synergent.”

On behalf of the League, Synergent, and our credit unions, we extend our congratulations to Amy and thank her for her ongoing service.