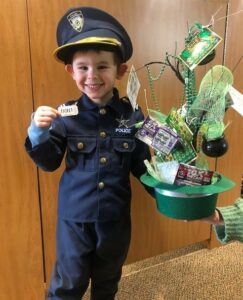 Connected CU’s fundraising efforts are off to a great start, thanks to some help from one of its younger members.

While he wasn’t officially “on duty,” Booker, whose mom is a Member Service Representative at the credit union, was excited to pull the winning ticket for the credit union after touring his local police station. During his visit at the station, he sat in a police car and received high-fives from all of the officers.

It was a great day for Booker, the Campaign, and of course, the credit union’s lucky contest winner.