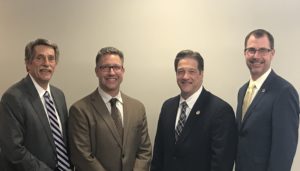 “Synergent is pleased to be the continued partner of Atlantic FCU, now the largest credit union in Maine,” said Gary Glenn, Executive Vice President of Information Technology for Synergent. “We take great pride knowing they have chosen us as their trusted managed services provider. Delivering an exceptional member experience is Atlantic FCU’s top priority and we’ll keep working hard to support their operations and organizational success.”

Headquartered in Brunswick, ME, Atlantic FCU has been in business since 1941 and has experienced growth year after year. Atlantic FCU recently merged with York County FCU and, upon completion of the transaction, is the largest credit union in Maine, with more than $730 million in assets and over 47,000 members who live, work and/or worship in Cumberland, Sagadahoc, and York counties.

“Atlantic FCU and York County FCU have had a long-standing, trusted relationship with Synergent,” said Roger Sirois, President, and Scott Chretien, CEO, with Atlantic FCU.  “We are excited to sign this new agreement as a combined organization. The services Synergent provides will ensure our members have a fantastic future ahead and the technology they need to meet all of their financial needs.”