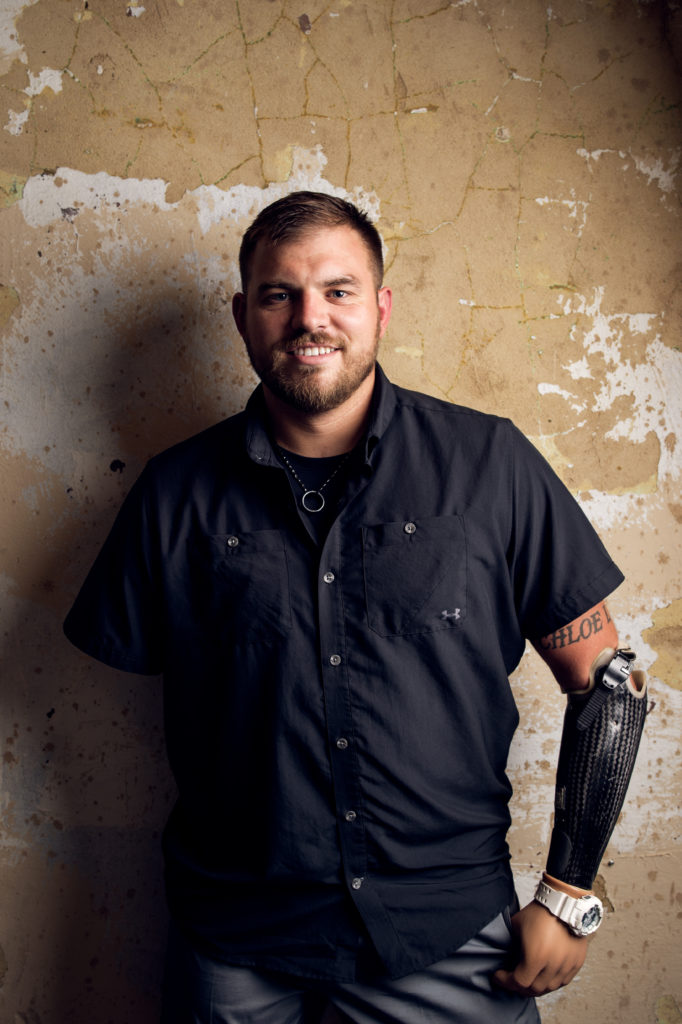 “Never give up. Never quit.” This is the motto of Travis Mills, who was the keynote speaker at this year’s Campaign for Ending Hunger Annual Celebration Luncheon. He shared his inspirational story with credit union representatives and League volunteers, framed within themes of motivation, goals, healthcare technology, and perspective.

In April 2012, Mills was critically injured in Afghanistan by an IED while on patrol, losing portions of both legs and both arms. He is one of only five quadruple amputees from the wars in Iraq and Afghanistan to survive his injuries.

Despite the severity of Mills’ injuries, his remarks about his military experience and post-combat life were filled with humor. League President/CEO Todd Mason and Vice President of Corporate Marketing and Communications Tim Brooks were even on the receiving end of some of Mills’ jokes!

Before talking about how he sustained his injuries, Mills got personal and spoke about his family and childhood growing up in Michigan. Mills was a varsity-level athlete who played multiple sports. He excelled on the football field and played during his high school and college years.

Following community college, Mills met with Marine Corps and Army recruiters to discuss his military options. He joined the United States Army and upon completion of his training at Fort Bragg, North Carolina, was deployed overseas.

He met his wife Kelsey online while serving in Afghanistan. Shortly after meeting in-person, they were engaged.  After getting married, they welcomed baby Chloe before Mills was deployed for a third tour of duty in Afghanistan. This was an assignment he took willingly.

Mills spoke about the day he sustained his injuries. Believing he would not survive, he asked his medic to leave him and help the others injured from the blast. He recalled asking if he would ever see his baby girl again.

Once stabilized, Mills was able to call his unit in Afghanistan from the hospital. He said to them, “Hey guys, thanks for what you did. I appreciate it. Don’t worry about me anymore, I’m fine. I’m going to be able to walk, drive, feed myself, everything. But you can’t focus on me anymore, you need to focus on the mission. I told them that because I can’t have them in Afghanistan worried about me. But I did say, when you get back from Afghanistan, I will be there.”

Throughout his recovery and the difficult months that followed, Kelsey, Chloe, and his squad motivated him to persevere. Mills also met other solider amputees who provided him with encouragement, including Marine Corporal Todd Nicely. He also was there to greet his unit when they returned home to Afghanistan, which included the medic who saved his life the day the IED exploded.

Mills praised the extraordinary care he received while staying at Walter Reed Medical Center and spoke about the innovative technologies that have helped him walk and grip again.

“I drive,” said Mills. “I’m an awful driver. If you guys are ever on the highway and you see me, be careful!”

After receiving some laughs from the crowd, Mills spoke about his desire to give back. He and his wife created the Travis Mills Foundation, a nonprofit organization which assists post 9/11 veterans injured during their service. He also discussed the wellness center he built for military families right here in Maine, where they can visit free of charge.

Mills’ gratitude for life and his desire to help others was on full display.

“At the end of the day, I’m just fortunate to be here,” stated Mills, while he also thanked any veterans in attendance for their service.

“Don’t dwell on the past,” he advised. He elaborated that he used to wish he could go back and change time. “I reminisce on the 25 years with arms and legs.  I’ve had seven incredible years without. And I’ve only had one bad day at work…You can’t always control your situation, but you can always control your attitude.”

Before concluding his remarks, he thanked Maine credit unions for working to combat hunger.  He noted how the Campaign is making a positive in communities across the state. Mills also stayed at the luncheon until every attendee had an opportunity to meet him and take a photo.

“Our annual luncheon kicks off our yearly fundraising drive and I can’t think of a better speaker to inspire our credit unions than Travis Mills,” said Jen Burke, League Public Affairs & Communications Manager. “Travis was incredibly generous with his time and I’m thrilled he was able to join us. He truly represents the credit union People Helping People philosophy.”